From Senior College Encyclopedia
Jump to navigationJump to search

This article is under construction. Please use any information it contains with caution. 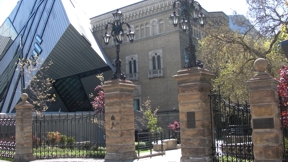 A pleasant paved pathway on the University of Toronto’s downtown St. George Campus following the Taddle Creek ravine from Bloor Street south to Harbord Street. The Bloor Street entrance is through the Queen Alexandra Gateway, a refurbished Edwardian stone and ironwork structure originally constructed on Avenue Road to commemorate the 1906 visit of the Duke and Duchess of Cornwall and York (subsequently King George V and Queen Mary) when Toronto was still very much a “British” colonial outpost. The gates were relocated to their present position between the Royal Ontario Museum and McMaster Hall in 1962. The meandering walkway originally followed the course of Taddle Creek but as the area became urbanized in the 19th Century the stream was diverted into underground tunnels creating another of Toronto’s many lost or buried rivers. Much of the earlier oak and beech forest cover was also lost, but a program to revivify the area has led to the planting of many new trees and flowering shrubs. At the north end of the walk a grove of 14 trees commemorates the victims of the 1989 massacre of 14 female students in Montreal. Walking south the pathway is bounded on the East by the Royal Ontario Museum and buildings housing the Faculty of Music and the Faculty of Law and on the West by the Music Conservatory, Varsity Arena, and the grounds of Trinity College. Another gateway erected in 2006 to commemorate the bequests of Avie Bennett to the University marks the southern end of the walk at Hoskins Avenue. In the summer of 2010 a small stone amphitheater was constructed on the west side of the walk facing east overlooking the ravine behind the Faculy of Music's awkwardly situated Edward Johnson Building.